Since its inception 228 years ago, the United States District Court of New York has been the setting of many important moments in American history. The courthouse began holding court sessions in 1789 with a Judge appointed by President George Washington and was the first court to sit under the new United States Constitution. Known as the oldest federal courthouse in the nation, the U.S. District Court of New York is now divided into four districts: Northern, Western, Eastern and Southern. The United States District Court for the Southern District of New York hears cases from eight counties and four major cities in the New York City area. This historical presence paired with the large surrounding population caused congestion in the lobbies, which prompted the court to search for a wayfinding solution.

Infax provided The United States District Court for the Southern District of New York with a solution that could guide patrons to their courthouse destinations. DocketCall®, the Infax Judicial Suite’s electronic docket display system, and Engage, a content management solution, were installed in the White Plains location within the Southern District in late 2015. Two monitors display the court’s docket in the White Plains location to help passengers find their way. After the first installation, the court reached back out to Infax to provide the DocketCall and Engage solutions to the Manhattan location in late 2016. The Manhattan location now houses three monitors with the daily docket and digital information as well.

The electronic docket and information displays that Infax provided have helped improve traffic within the courthouse. The name range indicator and rotating pages on each monitor help visitors find where they need to report in 60 seconds or less. This facilitates wayfinding and reduces crowding in the lobby areas. Overall, DocketCall and Engage have helped improve courthouse operations in the two locations within The United States District Court for the Southern District of New York. 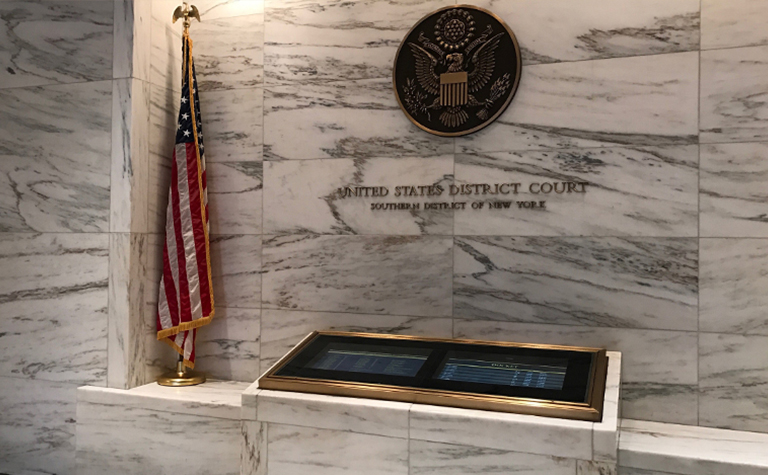