"In order to accommodate our contract schedules, Infax really stepped up and was able to implement the new FIDS system in about three weeks. Even with a quick implementation, the quality was still there as we have received a number of compliments about the system. Infax did an amazing job."

–James Rockholt, Director of IT and Telecommunications, Tulsa Airport Authority

In late 2015, Tulsa International Airport began the first of a series of projects using innovative software solutions from Infax. Employees of Infax and Tulsa International Airport installed the Infax WinFIDS® 7.0 and Engage software solutions on 56 airport-provided monitors to display flight, baggage and ticket counter information. The project was a quick turnaround: The entire installation was started and fully completed in January 2016. In addition to installing WinFIDS, which integrates with any airline interface to display real-time flight information, the airport also installed Engage, Infax’s content-creating software. With Engage, airports can display facility maps, advertisements, videos, directories and more. A later project involved the installation of Infax’s TRAX® queue monitoring system, which included two video analytic cameras and one alarm sensor, used by the airport to monitor the flow of traffic in the exit lane. The system sounds a warning alarm if a passenger attempts to go back into the airport after exiting from a one-way exit. In addition, the alarm sounds if passengers approach the exit lane from the wrong direction. Tulsa International Airport also received a pilot of the TRAX gate monitoring system, installed at three different gates using three video analytic cameras. By using TRAX to count deplaning passengers, airport personnel receive accurate and reliable passenger counts for each airline providing service to Tulsa International Airport.

The Infax WinFIDS and Engage solutions allow Tulsa International Airport to effectively communicate vital passenger and airport information in an easy-to-read format. The Infax TRAX solution monitors traffic flow and gathers data concerning the usage of the airport, allowing personnel to allocate resources more effectively. By using the Infax solutions, airport personnel can more efficiently manage the facility and save both employees and passengers valuable time. 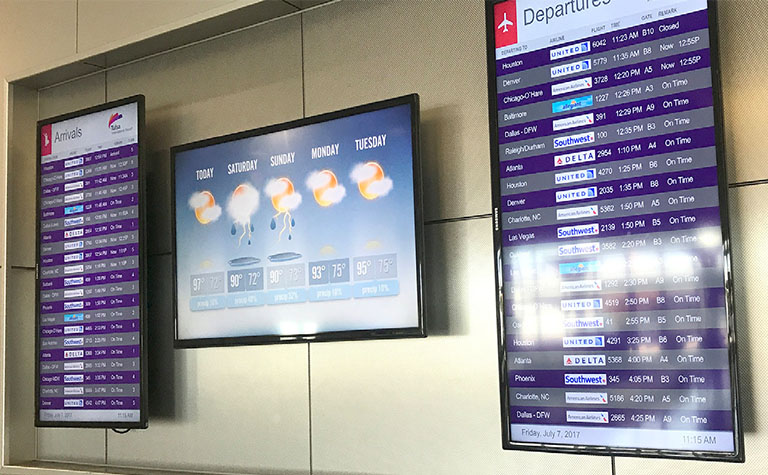