"It’s been phenomenal. It lowers the stress levels of the litigants; it’s one less thing to worry them. And it serves as crowd control; rather than gather around elevators they know exactly where they are going and they can get there in a timely manner."

The Dallas County Court System had multiple locations in need of judicial technology solutions. From confused patrons wandering the courthouse looking for their assigned rooms, to public notices disappearing off the wall, the Dallas County Court System was chaotic. Trials in the George Allen Courts Building had to be duplicated because patrons became so lost looking for their rooms that their hearings started without them. In the Dallas Municipal Court, visitors would build up in the lobby areas due to lack of information and direction. The Dallas County Tax Offices were swamped with confused patrons as well. In the Administration Building and Probate Court, public notices were illegally being taken off the wall and out of the facilities. To improve the situation, the Dallas County Court System sought a solution that could not only modernize the process of posting paper dockets and notices, but also organize the courthouse chaos. After proposing its suite of innovative digital signage solutions for justice facilities, Infax was chosen for the job.

The Dallas County Court System selected the Infax DocketCall® solution to guide patrons visiting the George Allen Courts Building. The courthouse, which is home to the county’s civil courts, has more than 45 courtrooms over nine floors. Using DocketCall, Infax’s flagship software solution for judicial facilities, the George Allen Courts Building can electronically display real-time case information to visitors. The software integrates with the court’s existing Tyler Odyssey case management system to automatically display the party name, courtroom and floor, time, and case number. Infax installed DocketCall on eight 46-inch monitors that are mounted to the ceiling in the lobby of the building. Now, patrons can immediately find where they need to go as soon as they enter the courthouse.

The last Infax solution implemented by the Dallas County Court System was CourtBoard, which electronically displays public notices. The Administration Building and Probate Court realized that some of their paper public notices were going missing. Since the documents have to be available for the public to view, Dallas County needed an alternative to printing and posting. To accommodate this need, Infax installed its CourtBoard solution on one 46-inch monitor at both the Administration Building and Probate Court. The eco-friendly software solution allows users to import PDF versions of public notices and display them on designated monitors. CourtBoard can also integrate with the court’s website, ensuring that the public can access documents at any time.

With the help of the Infax Judicial Suite, the Dallas County Court System has replaced chaos with organization and efficiency. In the George Allen Courts Building and the Dallas Municipal Court, patrons can find where they need to report in 60 seconds or less. DocketCall has helped eliminate almost all congestion in the lobby areas and has made missed trials a rare occurrence. In addition to court patrons, courthouse staff members also reap the benefits of Infax’s electronic docket display solution. With case information so readily available, patrons no longer need to take staff away from their tasks to ask for directions. In the county’s eight tax offices, visitors feel more confident and in-the-know with public messages created using Engage. The software’s drag-and-drop interface is intuitive and easy to use, allowing any authorized user to create content. The Infax CourtBoard solution in the Probate Court and Administration Building has been a vital addition to the Dallas County Court System. With no way for public notices to disappear, the court system can ensure that information is being distributed fairly to all court visitors. Constant access to information and improved patron confidence have made the Dallas County Court System more efficient overall. 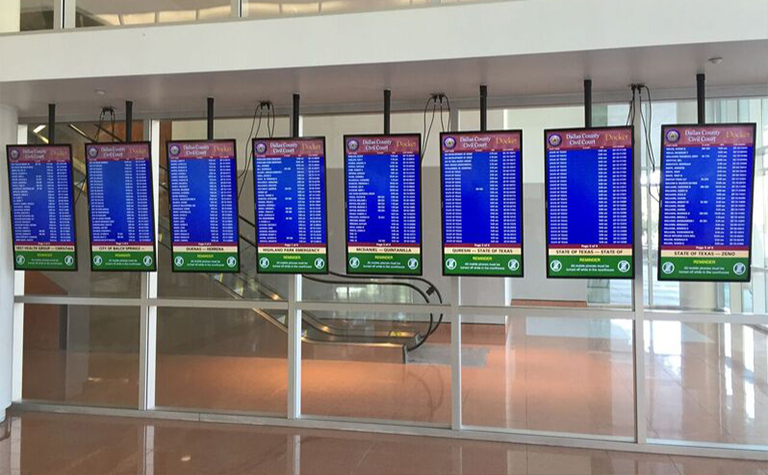