"Of all the systems we have deployed, the signage and kiosks are the first missed. The public would prefer to be without lights than directions."

The Calgary Courts Centre is the largest court facility in Canada. Located in Calgary, Alberta, it offers over one million square feet of court services and office space; including 73 courtrooms, judicial chambers, and amenities. Construction began in late 2004, and opened to the public on 2007. The Calgary Courts Centre consists of the Court of Appeal, the Court of Queen’s Bench, the Provincial Court, and Court Services. Infax was chosen to provide digital signage wayfinding solutions for the Court of Queen’s Bench and Provincial Court.

Several solutions in the Infax Judicial Suite were chosen for this particular project; they include DocketCall and Information Kiosks. With DocketCall, the court displays their daily calendar information on commercial grade LCD monitors. The information kiosks provide wayfinding solutions for patrons. A total of 113 commercial grade monitors and 4 information kiosks were installed throughout the courthouse. Out of the 113 monitors, 20-inch monitors were installed outside of the courtrooms, and twenty-four 40-inch monitors in the lobby.

The four touchscreen information kiosks offer floor-by-floor maps to guide patrons through the new facilities with turn-by-turn directions. Patrons can also use the kiosks to find their courtroom by performing a docket search by their name or case number, and view case details.

With the help of Infax, the Calgary Courts Centre implemented digital signage and wayfinding kiosks to help patrons navigate their way throughout the courthouse. The Infax system is now an integral part of the facility and Blake Munroe, Court Technical Support Analyst, says “Of all the systems we have deployed, the signage and kiosks are the first missed. The public would prefer to be without lights than directions.” 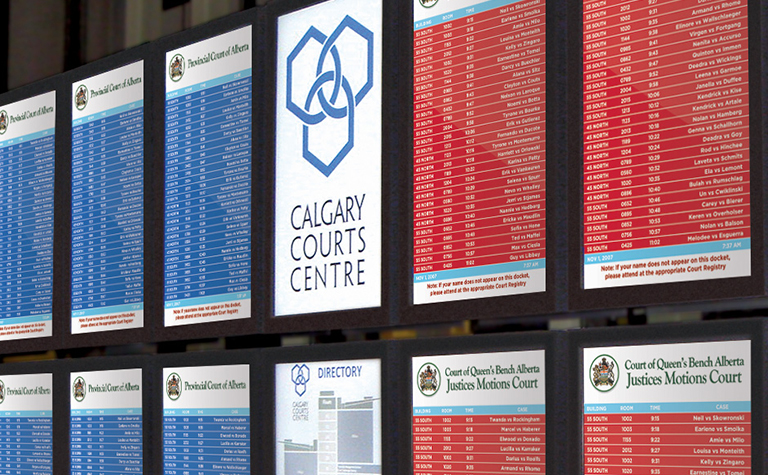